I would like to know the current requirements of a Morph because I have two units connected to a Teensy 3.1 board. The Teensy provides 100mA to be shared among the two Morphs. This setup has been running fine for some hours but yesterday one of the units displayed some strange blinks on the LED strip and this morning I couldn’t start it from the Teensy (the status led hasn’t the usual purple color but remains unlit). If I connect this unit over USB to my computer it runs fine.

My hypothesis is that 100mA is not enough for the 2 units and that the circuit functioned so far because there was some current left in the batteries. Do you think this is correct?

Thank you for helping.

Indeed using a Teensy 3.2 seems to give better results. The device can provide up to 250mA instead of 100mA. Note that to get 5V I take the current directly from the USB port (the Teensy can provide only 3.3V).

It’s strange because USBDeview - a USB inspector application - indicates that the Teensy 3.2 has a current limit of 100mA, not the 250mA it is supposed to provide. And I’ve got strange blinks again, but on the other Morph this time…

I’ve just figured out that the Morphs might request more current because they want to charge. So, how much current do they draw when charging? Now, I’ve reconnected the devices to the Sensel app and reflashed them with the “Slow charge(iOS USB)” option activated. I hope this will solve the issue.

Actually it doesn’t. If the battery is low, the slow charge option seems to be not enough to keep the device on when connected to the Teensy.

I took my tester out of its cupboard and tested the current consumption.

With the slow charge option off on both Morphs, they took around 100mA together (with variations between 98 and 104mA). With a Teensy 3.1, the amount reached 150mA with some variations down to 136mA - all the devices were powered by an adapter, not by the USB port. If the current source was switched to USB, the amount went down 120mA immediately. So indeed the Teensy 3.1 seems unable to deliver enough current for the Teensy itself and two Morphs.

With the slow charge option activated, the consumption went down to 70mA without the Teensy and 120mA with the Teensy. Still too much for a Teensy 3.1.

I don’t have the same configuration on my Teensy 3.2 so I couldn’t check the whole consumption but with the slow charge option off the consumption when using USB as power source was only 70mA therefore I suspect the Teensy 3.2 was not able to deliver 250mA but this should be checked

The consumption did not change according to contacts being made with the Morphs or not.

Current conclusion: an external power source is mandatory if I want the Morphs to keep their charge while using them.

Teensy 3.2 was not able to deliver 250mA but this should be checked

Technically the Teensy is not an electrically limiting factor if you’re drawing off its 5V output pin - which connects to the USB port almost directly.

USB devices may attempt to draw more than they request. It is up to the USB power source as to whether they’ll allow that draw or not. It is possible that your USB supply is rejecting the excess load. But I’d find it more likely to be something else.

Have you tried using a USB battery pack as a power supply to see if the problem still happens? I know it would break your USB-Serial connection during the test. However you could check and see if the behavior of the Morphs change. Plus you can use your Teensy’s LED as an indicator that’s independent of a computer connection.

Note: if you try the above suggestion, make sure that your code doesn’t wait around for a Serial connection from the computer. Otherwise it’ll be stalled there for the entire test. It usually looks like “while(Serial);”

Also worth trying:
Make sure your USB cable from the computer to your Teensy is as short as possible. Also make sure the wires are as thick as possible. There are flimsy USB cables out there that use high gauge (high resistance) thin wires to save money, but end up hampering higher current flows. Dealt with that recently myself…

You might also try plugging the Teensy into a Self-powered USB hub instead of directly into the computer. This could side-step any issues your computer is introducing.

Another option would be to use a usb splitter of sorts that draws current from two ports and delivers to one. Here’s the first example I found, though there are probably cheaper ones that are just USB 2.0 and not USB 3.0: 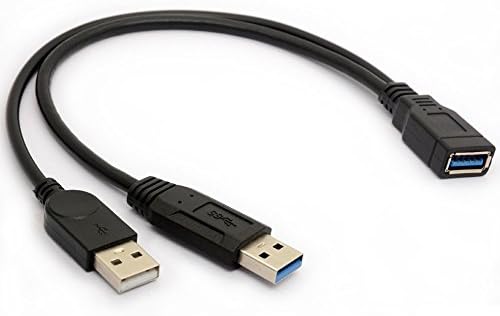 Thank you for all the suggestions Galen.

I have also tried a USB-C to micro USB adapter but the C port doesn’t offer more current. I have decided to power both the Morphs and the Teensy with a single power adapter and not with the USB power. Later I’ll check whether the batteries in the Morphs have higher or lower levels than the ones checked at start.

I have thought about the self-powered hub too but for my setup it would be an additional plug too, so it wouldn’t really be simpler than using the power adapter.

The dual power cable could be a solution but I don’t have any free USB plug.