anyone have any ideas on how to flatten it out? I tried double sided tape, but it doesn’t latch on the the overlay

my instinct is to put it in very hot water and then press it into shape, but i’m worried about warping it even more… 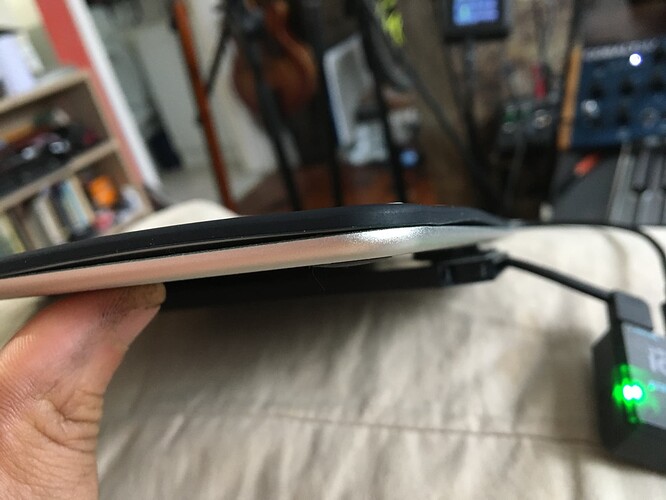 I’d try exactly what you proposed, but at first I would focus only on the edge that is already warped. Don’t dip whole overlay.
Maybe use a piece of cloth and lay it only on the warped edge and see if it helps.

Another thing I would try is to roll it with piano keys on the inner side.
And again, maybe not roll the whole pad, just the area that is warped.

If none of this works, I think I would’ve tried ironing it just like any sensitive material - cover it first with thick cloth and then iron the warped area.

In any of these ideas you should be extremely careful to not melt it. Take your time, don’t rush

thanks - i ended up trying boiling the sides and it’s improved it somewhat, but not enough - that along with double sided tape seems to do the trick - maybe i need to find a tape that latches on better to the rubber

the iron thing is a bit scary! but something to try if i have more problems, for now it’s improved enough that it’s no longer causing me problems when i use the bar on the bottom over the overlay (which i use for filter cutoff, but it was hitting notes on the right end before i boiled it…)

I’ve just got an idea - have you considered using hair dryer? You could use low power of hot air flow to make it more flexible. This along with placing it flat on a table should return it a bit to it’s original shape.

ooh - good idea - i’ll have to borrow one but I will try that - i suspect that if boiling didn’t do it, then heating it this way won’t be much different, but worth a shot

Yea it seems like it, but how did you boil it? I suppose you’ve rolled it bottom side outward, to counter the warped area. If not then you should also try this method.
But I think that laying it on a flat surface and treating with hair dryer should help. Let’s hope

Also putting something flat on it after heating it up could be helpful too.